Worker rights are linked to the contested forces of development, so the process through which exploitation is identified and overcome represents an ethical issue. In my next blog I look at issues raised by the establishment of worker rights norms at supra-national levels (such as the ILO, World Bank lending standards, trade agreements and the SDGs – Sustainable Development Goals), however here I want to look at the social construction of worker rights. Simply defining what lies within the system boundaries of worker rights is highly informative, since it reveals how exploitation is perceived and consequently how issues of worker rights, relative scale of exploitation (at general and specific levels), capacity and power of the worker, relative to the circumstances, to identify, challenge, mitigate and improve their situation. Each aspect represents a value judgement, for which the ethical framework adapted from Forsyth (1980) and Slim (1997) is useful since it highlights how differing views can result in conflict, and how difficult it may be to reconcile the contradictions.

Figure: Ethical analysis based on Forsyth and Slim 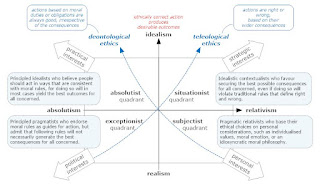 Ethical analysis, as shown in the figure, is based on determining the degree to which an individual’s moral views can be ascribed to low or high relativism and idealism. On the x-axis, Absolutists believe that actions are intrinsically right or wrong and can be contrasted to Relativists. On the y-axis, Realists are pragmatic, compared with Idealists who believe that only ethically correct actions will produce desirable outcomes. This produces a frame of four ethical ‘types’, which is further refined by the cross-cutting axes of deontological and teleological ethics that represent the tension between Kantian morality and one in which the ends justify the means. In exploring deontological ethics, I find Immanuel Kant’s deontology of the Categorical Imperative useful. An act is only morally justified if: (1) objectively speaking, the act can be done as if it were a universal law (one that applies everywhere and at all times); and (2) subjectively speaking, the act must be both the means to an end as well as an end in its own right, and (3) practically speaking, accepting (1) and (2) represents an auto-constraint.


In six of these eight ethical scenarios, worker rights serve either as the means to or as a component of wider social standards. Contentious issues revolve around interpretation (e.g.: does this national emergency warrant recourse to forced labour), enforcement (e.g.: how should worker rights reduce gender disparity in pay), or scope (e.g.: are worker rights appropriate to addressing the needs of different institutional contexts, such as informal work).  Furthermore, the lenses of interpretation, enforcement and scope allow the exploration of issues and values raised earlier, starting with the perception of exploitation.

The seventh ethical scenario of the teleological Subjectist may fit with certain commercial interests whereby worker rights receive superficial consideration (e.g.: part of a corporate social responsibility (CSR) plan), to be disregarded in an effort to maximise profit. Contrast this to the eighth ethical scenario of the deontological Subjectist who, by placing worker rights on a pedestal, disregards their limitations (e.g.: a consequence may be seen by the dramatic reduction in Western trade union membership since the 1980’s).

These last two ethical scenarios are interesting because of what they reveal about the institutions surrounding both work and rights and the historical development of modern worker rights norms at the supra-national level, which is for the next blog posting.