In my previous blogs I started exploring Fundamental Worker Rights by situating these within the universally recognised core principles of the ILO whose expression, understanding and enforcement is directly linked to ethical and moral values. Something is ‘fundamental’ because it is vital to human beings and where denial may destroy its victims. And yet, few societies are successfully able to establish the conditions within which these rights find effective expression. Most, but not all, societies invest resources into education with the aim of eliminating child labour which protects this ‘fundamental’ worker right. Contrast this with “human trafficking” (the modern neologism for slavery or forced labour) is which is extremely difficult to eliminate because, while homo sapiens is an extraordinarily cooperative species, we are also ruthlessly exploitative of those perceived as ‘other’. Effectively, our limitless capacity at inventing ‘otherness’ facilitates this ability by enabling us to become blind to, ignorant of, or worse still – find justifications for exploitation.

Social institutions then, produce and anchor inequality – and do so despite the universal acknowledgement by nations around the world of ‘fundamental’ worker rights. How can such disconnect between rights and reality be explained? It is fairly easy to understand how child labour destroys life chances through stunted growth and lack of access to education. The remedy is also tried and tested: quality education and sufficient resources to allow children to stay in school. Such awareness of the problem and solutions is much more difficult with respect to trafficking or inequality since it requires critical awareness of how culture affects societal outcomes and thus life chances. Awareness distinguishes the importance of and underscores the need for the fourth ‘fundamental’ worker right. Unlike the other three ‘fundamental’ worker rights which are passive and invoke protection against inequality, forced or child labour, the fourth right is active: the right to freedom of association and collective bargaining are rights to agency and self-determination – in other words, the right to exercise power.

As forms of socially constructed norm or value, ‘fundamental’ worker rights represent attempts to establish and set limits on human behaviour. Rights are a form of intervention in the complex and chaotic processes of social change, which are directly and inextricably linked with power and conflict. The tools we use to explore this terrain must therefore account for complexity, be conflict-aware, and recognise that outcomes only become embedded through processes of social learning. Such a multi-dimensional model is proposed below: 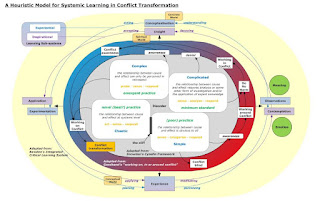 Central to this analytical model is the recognition that the world is a disordered place upon which societies’ merely project permanence and stability through the establishment of institutions with their accompanying rules, norms, meanings and values. Institutions achieve stability – to paraphrase Hannah Arendt [1] – because they allow people to develop shared purpose that rely solely on valid and binding promises through which an unknowable future can be disposed of as if it were the present – and which consequently underpins all forms of collective human interaction by providing us with the sovereignty to manage our own affairs.

The “Cynefin” model, developed by Snowden [2], allows for the distinguishing of systems within this disorder defined as ‘simple’, ‘complicated’, ‘complex’, or ‘chaotic’, based on the relationship between cause and effect and proposes forms of interaction with each system type. In a ‘simple’ system cause and effect appears obvious allowing interaction to be described as sense, categorise and respond. ‘Complicated’ systems are ones where the cause and effect relationship requires investigation or expert knowledge, interaction requires sense, analysis and then response. In ‘complex’ systems the relationship between cause and effect is only knowable with hindsight; accordingly interaction is defined in terms as probe, sense and respond, and leads to emergent practice. Last are ‘chaotic’ systems, where the relationship between cause and effect is not visible at the level of that system. Interaction here is defined as act, sense and respond which in turn leads to novel practice. An institution’s ability to define and set the terms of the system in which it operates reflects the degree to which the players wield power within that system. Snowden adds one final feature to this model – a cliff marking the boundary between simple and chaotic systems and which represents the danger that lurks to catch out the unwary who, believing they are in a simple system, commit grievous errors when in fact it is not. It is safer to develop understanding by crossing systems boundaries from ‘simple’, to ‘complicated’, ‘complex’ and on to ‘chaotic’.

This progression from simple to chaotic is reflected in the next level of the model which incorporates conflict as developed by Goodhand [3]. Merely becoming conflict aware is not sufficient agency to overcome the dangers of conflict blindness. While it is a useful first step to allow individuals and organisations to work around conflict in an attempt to “do no harm”, conflict is a necessary and unavoidable part of social life. Denying the existence of conflict represents a form of privilege – by which I mean that those who benefit most from a culture are frequently ignorant of the challenges facing those who benefit least. By recognising that their agency is a form of working “on” conflict, individuals and organisations are taking a moral stand (and which I discuss in my Blog “Ethics, development and worker rights”) with the aim of achieving transformation.

This leads to the third level of critical social leaning systems as developed by Bawden [4] and into which the earlier models have two entry points – the intertwined insightful and experiential learning systems in which emotion interlinks with meaning to form bridges between our concrete and spiritual worlds. Observations are the perceptions that result from experience, by meditating and contemplation. Understanding leads to conceptualisation, as focusing leads to insight. This paves the way for acting to lead to experimentation, and accepting to application. The cycle then comes full circle with applying and planning leading to yet more experience.

Next, I want to look at how this model might be applied to situations where workers are being denied one or more of their ‘fundamental’ rights.

Fundamental Worker Rights, or are they?

I want to explore what a ‘fundamental’ right really is. In order to exist, do fundamental rights need to be codified? What is the opposite of a fundamental right? What implications can be drawn for how fundamental worker rights are vulgarised, policed and enforced?

As defined by the Oxford English Dictionary, the word ‘fundamental’ means to form a necessary base, the essential nature of something that is so basic as to be hard to alter.

Fundamental rights are not necessarily codified as indicated by the Nuremberg Trials where members of the Nazi regime were retroactively convicted of moral crimes that did not and, surprisingly, do not exist in statutory form. Offenders were held accountable on an individual basis for the morally repugnant acts that were committed collectively and were unable to claim defence based on the absence of a relevant law. The presumption was established that some acts are so inherently wrong that people don’t even need to be told – it’s that obvious.

In 1998, the ILO declared four categories of worker rights as fundamental [1], namely:


These rights have been recognised as universal, meaning that as far as the world is concerned, they apply to all people everywhere, regardless of the country’s level of economic development, or if the Convention has been ratified. Furthermore, people with special needs, including the unemployed and migrant workers, are specifically included. Equity, social progress and the eradication of poverty cannot be achieved through economic growth alone, but requires the adoption of additional measures. Put another way, and to paraphrase the Nobel Prize winning economist Amartya Sen, ‘fundamental’ worker rights represent both the means and the ends of development.

The ILO’s Declaration on Fundamental Principles and Rights at Work thus applies a similar moral presumption to that established at Nuremberg. Because it destroys people, the violation of any one of the four categories of fundamental worker right is automatically considered to be a morally reprehensible act, something that is so self-evident that the perpetuators ‘know’ they have done wrong and where collective wrongdoing does not excuse individual culpability. And yet, while global condemnation of the acts that led up to Nuremberg was universal and long-lasting, acts that violate fundamental ILO worker rights are only ever condemned sporadically and in abbreviated form.

In my next blog I want to take this analysis further and examine some methods and models that might allow further exploration.

The idea behind this conceptual research paper arose from a collaboration with Volunteer Activists for whom I had organised online training ...

Michael Schwaabe
I have over 25-years’ experience as a human and labour rights activist and trade union leader, and over 5-years’ experience as a Development Programme Director working with trade unions and worker rights activists in both the Democratic Republic of Congo and North Africa. These experiences simultaneously motivated and informed my study for an MSc in Development Management at the Open University.